Eddie's Back, and I'm taking credit for it! 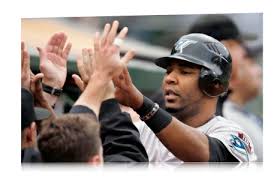 I Said it Here.

I Said it Here.

I Started by saying it Here.

Clearly, someone in the Blue Jays' front office is drinking my Cool-Aid. I've been all over bringing back Eddie since I started forcing my thoughts on people electronically. I suggested a first base platoon before he was ever put on waivers.

I'm taking all the credit for this.

As far as the contract goes: What a steal! almost half of what Encarnacion made last year? Yes please. A CLUB option, in case he realizes his full potential? Also yes.

Worst case scenario: Encarnacion is a streaky DH, or usefull bat-off-the-bench for $2.5 Million.

Perfect World Scenario: Encarnacion works dilligently over the remaining off-season and becomes an above-average defensive 3B, Hits 40+ HR, and brings his batting average up to the .270-.280 range. Realistic? No, but that's what everyone would have said if I had proposed the same type of thing for Jose Bautista last year.