What about a Platoon? 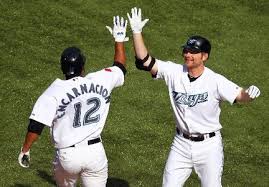 I've already made a case for keeping Eddie around here, but I've been thinking more about it, and I really think now that the Jays should strongly consider a 1B Platoon with EE and Adam Lind. "Lindcarnacion" would provide average-above average defense, and their peripherals would be stellar.

The other issue is Defense. Defense at 1B has never been a huge premium, and I'm of the opinion that Lyle Overbay was overrated at the position. That said, in some very small sample sizes, Lind's UZR/150 at 1B was 20.4. Encarnacion's -19.6 rating can only be explained by the fact that he only played ONE major league game there to date. Everyone knows that he has some deficiencies on defense at 3B, but at 1B, his arm is taken out of the equation. Fewer throws = fewer thrwoing errors.

So by comparison, the Jays would bring that position overall to an elite level, assuming mediocre-below average defense. If Anthopoulos doesn't end up making a move, I'm more than comfortable with this platoon going into next season.
Posted by The 5th Starter at 9:39 AM