The (Brief) HIstory of $100 Million Contracts 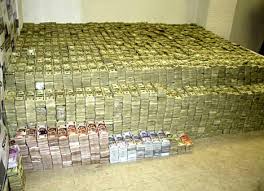 When Kevin Brown broke the $100 Million dollar mark for a Baseball contract before the 1999 season, most of the baseball world was shocked. His $105 Million, over 6 years, was almost a complete outlier, and set a precedent that has continued well into the new millennium. Interestingly, after only 10 years, the Kevin Brown deal now ranks as only the 24th largest contract in baseball history.

In honour of Cliff Lee's new mega-deal with the Phillies (you heard about that, right?) I thought I'd take a look at what kind of Return-On-Investment teams have received from dishing out these huge commitments.

Albert Pujols. $100 Million, 6 years (2004-2010, plus option for 2011) Cardinals
- Hard to argue that this deal hasn't worked out terrifically for the St. Louis Cardinals. Pujols has put up a ridiculous 57.8 WAR over the duration of this deal, far surpassing the value of his salary in each year that he has been under contract. No question that any deal involving Pujols in his prime gets an A++. I'd be concerned if I were the Cardinals though, with regards to his next contract. Age could become a factor.

Carlos Lee, $100 Million, 5 Years (2007-2012) Astros
-It's hard to remember that in the first two seasons of this contract, Lee actually delivered more value than what he was paid, posting WARs near 4 in both years. Since then, however, this contract has become a complete albatross for the Astros. Lee actually managed to deliver negative WAR last year, and unless he suddenly turns things around, this contract is a total bust. I'll give it a D, since they did get 2 years of production.

Kevin Brown, $105 Million, 6 Years (1999-2005) Dodgers
-Surprisingly, not a total disaster. Brown turned in 3 of the 6 seasons with WARs  over 6. One of those seasons actually allowed the Dodgers to trade him to the Yankees for the last 2 years of the deal. The Yankees actually got the least amount of value from this contract, with Brown never contributing a WAR above 2.5 for them. I'll give the deal a C+ for the Dodgers, and a big F for the Yankees over the last 2 years.

Ken Griffey Jr, $116.5 Million, 9 Years (2000-2008) Reds
-When you hear that players don't want to play on turf because it shortens careers, Ken Griffey's time at the superdome should be the first example that comes to mind. He managed to earn this mega-deal with his great play in Seattle, but absolutely could not stay healthy with the Reds. He only posted one season that had a 5 WAR rating. The contract gets a D-, only because I'm allowing injuries to mitigate total failure.

Carlos Beltran, $119 Million, 8 Years (2005-2011) Mets
-When he's been healthy, Beltran has more than justified this deal. His injury problems over the last few seasons have made this deal look worse than it has been. When I looked him up, I expected this deal to be a disaster, but injuries aside, Beltran has been excellent for the Mets. Solid A.

Jason Giambi, $120 Million, 7 Years (2002-2008) Yankees
-Again, I had wanted to give this one a big F, but Giambi put up two solid seasons at the beginning of this deal. He was then injured, and never really came all the way back. He was steady, but unspectacular for the remainder of the deal, which did not justify the salary. I'll give them a D+ for getting 2 years.

Mike Hampton, $121 Million, 8 Years (2001-2008) Rockies
-Wow. This one was BAD. Hampton never delivered a season where his WAR was higher than 3.0. Just a total disaster. Although, the Rockies did manage to trade him to the Braves, so partial credit for that. Still, total F.

Ryan Howard, $125 Million, 5 Years (2012-2016) Phillies
-This extension hasn't even kicked in yet, and there are already some concerns. I hope Howard rebounds next year and learns to hit lefties. Otherwise, look out. Temporary grade of C, depending on Howard's ability to rebound.

Jayson Werth, $126 Million, 7 Years (2011-2017) Expos Nationals
-Just signed. Already baseball pundits around the league hate it. I hope he proves them wrong, but until he does, C-.

Vernon Wells, $126 Million, 7 Years (2008-2014) Blue Jays
- As a Jays fan, it's nice to see them so high up on this list. Although the contract hasn't returned full value, I can always point to it to prove the team's willingness to spend money. The first two years of his contract were alsmost total losses (1.5 WAR and 0 WAR respectively) Luckily, his contract was back loaded, so those years aren't as bad as they first appear. His 4.0 WAR last year is a good step in the right direction, but Wells will really need to deliver for the next 4 seasons if the Jays hope to get anything near full value. As it stands, I'm giving the deal a D. And that's just 'cause I'm a fan of the team.

Barry Zito, $126 Million, 7 Years (2007-2013) Giants
-7.4 WAR is definitely what the Giants had in mind when they signed Zito. They just didn't expect that that would be the total WAR he would put up over his first 4 seasons! Zito's contract is a huge anchor to a team that will soon need to re-sign some of its young stars. Solid F. Although, he has put up a better WAR total than Wells has over the contract length, so maybe I need to review VW's grade...

Alfonso Soriano, $136 Million, 8 Years (2007-2014) Cubs
- A trend is starting to emerge, where these deals tend to yield a grat first season. In this case, Soriano put up an excellent 6.9 WAR in year one of this deal. His production dipped to 4.3 WAR the next year, and the last two years Soriano has been hampered by injuries. He still has time to get healthy and earn some more of this deal. I'll give it a C, based on Soriano getting healthy.

Johan Santana, $137.5 Million, 6 Years (2008-2013) Mets
- He never returned to his dominance that he had with the Twins, which is undoubtedly why the Mets signed him. He's still been above-average as a Met, but that's not nearly good enough to justify his salary. Now injured, and unlikely to return until after the All Star break, this contract is looking pretty bad. I'll give it a D, as Santana has been good, not great, for a large salary.

Todd Helton, $141.5 Million, 9 Years (2003-2011) Rockies
-3 of the first 4 years of this deal were excellent. Helton has been a mainstay in Colorado, and delivered good value for his contract. 2008-9-10 however, he only managed 5.2 WAR combined. The Rockies will likely be happy to have his contract expire next year. I'll give them a C-, because they did get some good production early on.

Carl Crawford, $142 Million, 7 Years (2011-2017) Red Sox
- The common belief in the baseball world is that speed ages well. If you look a little higher on this list, you'll notice that was not the case for Ken Griffey Jr, or Alfonso Soriano. That said, the Sox got a good signing, and they look good for the next few years. B+.

Troy Tulowitzki, $157.75 Million, 10 Years (2011-2020) Rockies
-Boy, do the Rockies ever throw some big money around. Their third appearance on this list is still too early to judge, but it's hard not to love a Short Stop that gives that kind of offensive production. An A for now.

Manny Ramirez, $160 Million, 8 Years (2001-2008) Red Sox
- Manny was a rock in left field for the Red Sox for most of the last decade. He was a cornerstone of two championship teams. Hard to argue against that, despite his hefty price tag. I'll give the deal a B-, as there was some 'friction' towards the end, and he head some mediocre campaigns sprinkled in as well.

CC Sabathia, $161 Million, 7 Years (2009-2015) Yankees
-Only two years in, but the deal looks great. Barring injury, CC will continue to be a work horse for the pinstripes. The deal gets an A+, as he already has a World Series ring with the Yankees.

Mark Teixera, $180 Million, 8 Years (2009-2016) Yankees
- I like this deal less than CC's, because of the extra year, and because Teixera is prone to slumps and slow starts. I expect his deal to look a bit worse than Sabathia's by the time they're over. I still grade this as a B for now, mostly due to the championship.

Joe Mauer, $181 Million, 8 Years (2011-2018) Twins
-Great to see the Twins keep a player that they've developed. The extension kicks in this coming season. I'm leery as to how well a catcher can hold up, but if anyone can do it, I'll bet on Mauer. I'll rate it an A-, just because they managed to keep him, and avoid free agency.

Derek Jeter, $189 Million, 10 Years (2001-2010) Yankees
-Jeter has been a superstar for the Yankees. He plays a premium defensive position, and gives solid offensive production at the top of the order. Other than last year, he's produced above 3 WAR for the duration of the contract. I have to give this one a grudging A.

Alex Rodriguez, $252 Million, 10 Years (2001-2010) Rangers
-The first 3 seasons of this deal were more than  worth it. Adding in the fact that the Rangers managed to unload the deal also makes it better. Rodriguez was nothing short of beastly for 7 of the first 8 years of this deal (and the down year, he still put up 4.3 WAR) He opted out of the final 2 years for the nextcontract on this list. For this specific contract, full value, A.

Alex Rodriguez, $275 Million, 10 Years (2008-2017) Yankees
-I have no idea how A-Rod's agent managed to get the Yankees to bidagainst themselves on this deal. No other team coul dhave afforded this deal, nor would they want to. Injuries have set in, and he's already a shell of his former self. I'd expect that he'll have one-or-two more excellent seasons, but nothing to nearly justify this contract. D-, only not a fail because of the marketing potential if he passes some major milestones.

So, what have we learned from this analysis? well, to start, many of these monster-deals are too new to completely judge. The ones that have enough time to accurately assess, however do not often pan-out. For players that are signed much younger (A-Rod, Pujols, Jeter) There is a high success rate. For true free-agent signings, the successes are fewer and farther between.