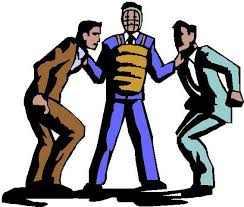 I searched Google Images for "Arbitration" and how awesome is it that this was the image? I think it captures the baseball as a business angle nicely.

At any rate, the Jays made some business moves today, regarding arbitration filings. I think that there is some real unspoken information that can be gleaned from this:

-Jose Bautista is going to be a free agent after the 2011 season. The Jays are going to go to arbitration with him, and an arbitrator will award a 1-year guaranteed contract. There may be a small chance that the two parties can work out an extension during the season, but I'd wager that if Bautista is willing to go through the arbitration process, he'll likely want to try free agency. If the Jays stumble early, he'll be a big trade chip. I am assuming that he doesn't turn back into a pumpkin.

-The Blue Jays don't seem to want Jason Frasor very much. I feel bad saying it, but there was likely room to make a deal for both sides, and plenty of time to do so. Frasor is a solid-but-unspectacular reliever, and I felt like a deal could have been reached in the $3-4 Million range. There has been much written by my Jays-Blogging compatriots in the wake of the Jon Rauch (Rou-sh) signing, that the Jays Bullpen is overfull. Combined with the signing of Rauch, I'm hypothesizing that Frasor will be moved before the team comes north at the end of March. The Jays gambled on an extra pick by offering him arbitration, and had their bluff called. It may work out for them in the end, assuming they get a decent prospect in return.

-On Jon Rauch signing: Awesome. He is a big, bad man. If he can command his stuff, he will be a terrific addition. Caveat: He's mostly been an NL guy.

-The Jays moved quickly and decisively to agree to terms with 7 (Yes 7!) other players that were arbitration eligible. The list included: Janssen, Litsch, Camp, Morrow, Escobar and Davis. Impressive last minute negotiating. I haven't looked at all the agreements yet, but I like all of those players, and am excited to have them all back. (Several of my fantasy baseball team's fortunes are tied closely to Brandon Morrow's future success, so I have a geeky-rooting interest...)

EDIT: After the salary arbitration filinigs were made public, my suspicions are given even more credence regarding Frasor. They two sides are only $500,000 apart (That's a lot to you and I, but a pittance to an MLB Club) the fact that neither side was interested in a compromise makes me believe even more that The Jays aren't that interested in Frasor.
Posted by The 5th Starter at 12:34 PM